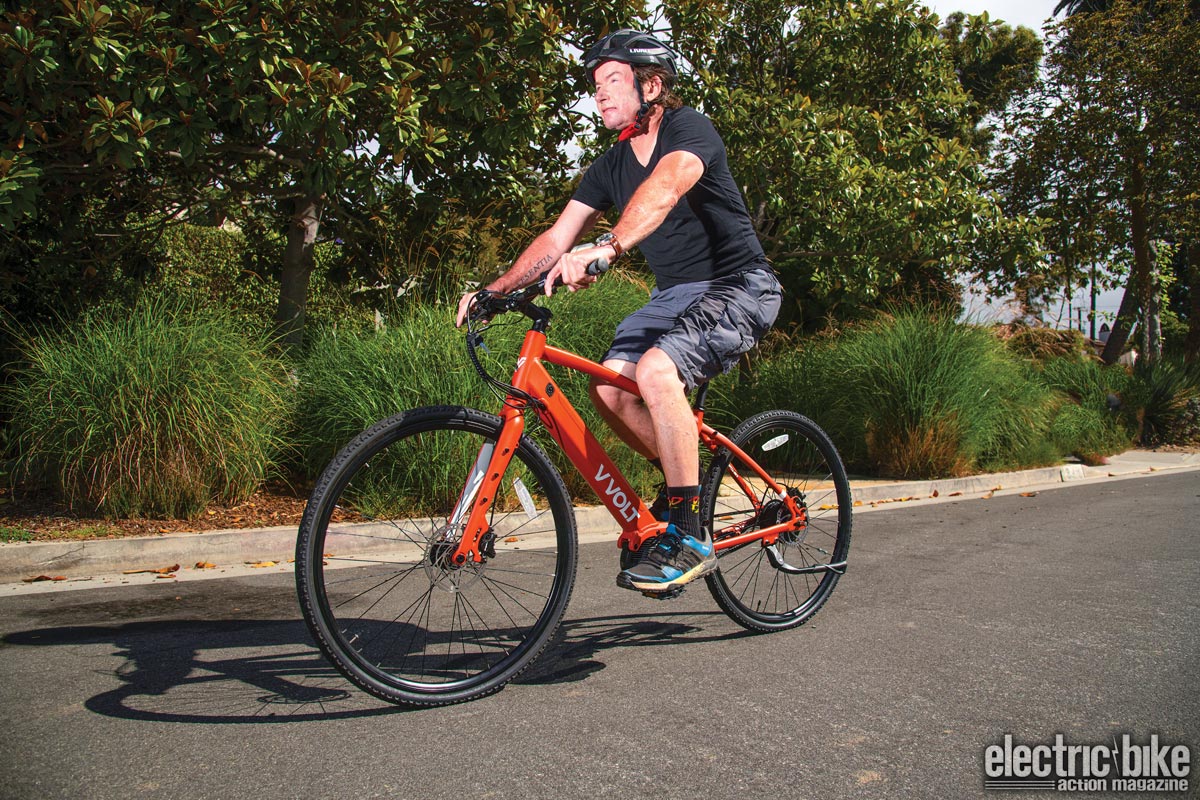 Kyle Ranson, owner of Showers Pass cycling clothing company, along with a few other enthusiastic e-bike people, among them bike enthusiasts from around the globe, decided to start an e-bike company. Well, maybe more than an e-bike company with their future plans in electric micro-mobility, but for now it’s a line of affordable e-bikes that provide great ride quality. V Volt’s first Stellar line includes models called the Alpha, Proxima and Sirius. Sounds like they’re shooting for the stars, doesn’t it? The aluminum Proxima is a diamond-shaped frame, though it’s a bit more curved up top. The line of the top tube arcs slowly down to the top of the seat tube, then the seatstay continues that arc all the way to the rear dropout. It’s an attractive bike, with bosses for a water bottle low on the seat tube and for a rear rack and front panniers. With all these mounting points, it would be easy to install some fenders as well. The bike is available in three color choices—Chalk White, Mars (tested) and Slate.

There are some nice components on the bike. Some brands you’ll know, like Enviolo for the internally shifting rear hub, while others, like the Radius hydraulic disc brakes, you may not. The rear hub shifts by twisting the grip-shift-style half grip on the right side. When you turn it one way, it shows a bicycle climbing a steep hill (lower gear for starting and for climbing hills); turn it the other way and the hill gets flatter (taller gear for faster speeds at a given cadence).

The bike does come with a headlight and a taillight as accessories. These are not built into the bike, nor integrated into the battery system, so you can install them or leave them off. Both are rechargeable.

The mid-drive motor they chose is from Austrian company MPF. It’s a 250W unit that can put out peak power of 500W. It’s a fairly small and unobtrusive mid-drive motor. It matches Bosch’s torque rating at 85 N/m.

“The overall ride quality and fun factor are quite high. This thing rolls so smoothly and quickly across the pavement.”

The battery is a bit anemic for a commuter/touring bike. It’s a 375Wh battery from Celxpert and made using LG cells. While that’s good quality and keeps the bike lighter and less expensive, it is also something to consider if you like longer rides or have a longer commute.

The display from Explova is nice and tidy, and has all the controls you’ll need right there. They do have an upgrade called Warp Core that you can purchase when you buy the bike, which converts your 20-mph Class 1 e-bike to a 28-mph Class 3 bike. The conversion is something to consider if you’re riding in city traffic in bike lanes. There is a Vvolt app, but, apparently, it’s only for Android phones at this point.

This is aimed at a rider who wants a short-distance commuter, especially one who wants a mid-drive bike that seems solidly built, is easy to assemble and won’t break the bank.

Before we even talk about ride quality, let’s first talk about unboxing and building the bike. The box has directions on it, requesting that customers don’t open it from the top but rather from one specific side. The reason for this is the unique way they’ve packaged the bike. The bike comes almost fully built, with the handlebar on and the front wheel and the pedals off.

“The overall ride quality and fun factor are quite high. This thing rolls so smoothly and quickly across the pavement.”

There is only one zip tie-to cut on the whole thing, and the rest is held in place by Velcro straps, one of which serves as the handle to pull the bike out of the box. We appreciated this feature, because lifting a 50-pound bike with parts zip-tied to it all over the place requires either two people or a back-breaking effort by one. It took longer to remove the poster board wrapped around the tubes of the frame (to keep it from getting scratched during shipment) than it did to install the front wheel via a thru-axle and the pedals.

We put it on the charger for a few hours. The charger itself gets quite hot. Then we took it for a ride. Because it’s a mid-drive bike with a torque sensor, the power delivery from the MPF motor was very natural and predictable. This is one of the reasons why we love mid-drive e-bikes. Also, because you can control the power to the back wheel via the gears or, in this case, the continuously variable planetary rear hub.

Taking the place of a more common drive chain, since there’s no outward gears, they chose a Gates carbon belt drive. The Gates system is great because it requires no maintenance. It doesn’t stretch, you don’t need to lubricate it, and it’s incredibly quiet. In fact, the motor is also surprisingly quiet. This may be the quietest motor we’ve yet tested. The overall ride quality and fun factor are quite high. This thing rolls so smoothly and quickly across the pavement.

The aluminum frame and fork are quite stiff, and the tires have very little volume. This means that the bike will roll over the ground with little resistance but will also transfer the energy from bumps in the road almost directly to your hands and backside. If you have imperfect roads as a daily experience, you might want to consider a suspension seatpost and perhaps a suspension stem just to make the ride a little more comfortable. We love the quiet motor and belt drive combination, the internal-shifting rear hub, the ride quality, and the price of this bike. It’s an excellent choice for commuters on smooth roads that don’t have a long commute. We’d love to see an option for a bigger battery or at least a second battery.

There is also a model called the Sirius that offers an air suspension fork and bigger tires for $100 more, and two single-speed models designated Alpha (with your choice of a step-through frame or diamond) that have a rear hub motor for $1399. All of the bikes use the Gates carbon belt drive system.